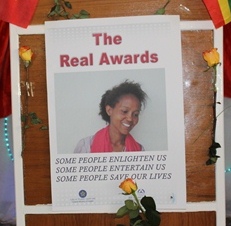 Photos Courtesy of Save the Children

Frontline health workers work tirelessly to ensure that the health needs of their communities are being met and usually receive little to no recognition for their commitment to this work. The first annual REAL Awards was an opportunity to honor ten frontline health care workers around the world. A health extension worker (HEW) in Ethiopia who has been trained by Ministry of Health and SC4CCM was one of the first recipients of the prestigious REAL Award which was presented to her in March at a ceremony in Adwa Town in Tigray National Regional State, about 871 kms north of Addis Ababa, the capital of Ethiopia.

Over 160 participants attended the ceremony including political and religious leaders from the area, delegates from NGOs, and community representatives. Staff from Save the Children, two REAL Award winners from the U.S. and a blogger also traveled to Ethiopia to attend. Local radio and television stations reported from ceremony to share the event with the larger community.

As the invited guests travelled from the regional airport in Axum to the town of Adwa, a crowd of community members were standing on the roadside holding posters with slogans and a picture of their local awardee, Tirhas Merbrhatom.

Ato Hagos Godefay, Tigray Regional State Health Bureau Head, gave the opening remarks describing the success of the health extension program in the region to date and admired initiatives such as the REAL Awards to give recognition to health extension workers which can help motivate. He also expressed his gratitude to all stakeholders who have been participating in making the health sector much stronger in the region. He added that Tirhas has worked remarkably on reduction of maternal and child death through her promotion on institutional delivery which has been one of the major challenges of the country. Her continuous effort has led her to be the first HEW to declare zero home deliveries in her community for which she is also recognized by the region.

A JSI/SC4CCM representative gave a speech entitled “IPLS (Integrated Pharmaceutical Logistics System) and Maximizing Efforts to Capacitate HEWs.” This was an opportunity to advocate the necessity of logistics which remains a major challenge even though it receives less attention.  Tirhas’s success is due in part to her remarkable work on properly managing pharmaceuticals thereby ensuring product availability at the health post level ensuring the community can receive complete service.

“This event is special in our country in that it has a lot to offer to the global community with regard to improving the health system at the grass root level. Hence, I would like to convey my message that logistic as key part of the health system has been a challenge to HEWs in Ethiopia especially at the community level, and through a collaborative effort of different stakeholders, change can be brought which is revealed by such an outcome we are celebrating today. IPLS at the HP [health post] level has seen to have a lot to do in mounting the quality of health thereby increasing the health seeking behavior of the community which will in turn reduce child mortality and improves maternal health in effort to achieve MDGs”

Ms. Mary Beth Powers, chairperson of the coalition which presented the REAL Awards, also gave an inspiring speech. She described why the REAL Award Coalition has been instituted around the globe.

“It was due to this realization about the amazing and lifesaving work of health workers and the lack of proper recognition of this work to society, that we created the REAL Awards…When the panel of judges reviewed the summaries of the work of the outstanding health workers who were nominated from around the world, it was no surprise to me that one of the winners would be drawn from Ethiopia working for a government that has been a leader on bringing health care to every community. Ms. Tirhas Mebrehtum was nominated due to her dedication and commitment to ensuring continuous care is available to her community which is not easy due to logistical challenges.”

Dr Tewodros Bekele, HPDP Director, remarked on the effort of the Ethiopian Ministry of Health to reduce child mortality and improve maternal health saying that such outstanding performance shows that better outcomes are possible through an innovative health extension programme. He praised all HEWs working closely with the community and implementing HEP and expressed his appreciation for the remarkable recognition which will add value to strengthening the health extension program by serving as a motivating factor for HEWs. He said the government is aggressively working on empowering and increasing participation of the community to sustain the health extension program. He conveyed a message to all stakeholders to work together in the reduction of child and maternal mortality in the country. He also congratulated Tirhas Mebrhatom for her efforts and achievements, which will also have a symbolic context to the 30, 000 plus HEWs found in the country. 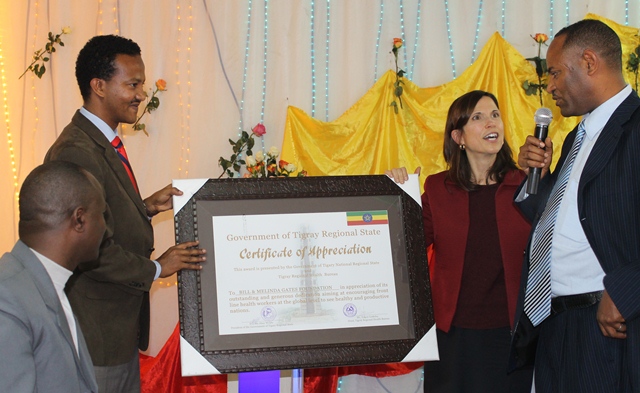 The celebration continued in the afternoon at the health post where the community showed their happiness for Ms. Tirhas and her award. The community hosted an amazing coffee ceremony for all the guests and showed their appreciation of this honor for Ms. Tirhas, whom they respect for her considerable service to the community. Ms. Tirhas demonstrated her activities at the health post including how she uses teaching aids, manages her pharmaceuticals, discusses with mothers how they feed their children and informs the community of antenatal care services. In her work, she uses service statistics data, plans and achievements, checklists, various tracking sheets and documents.

A celebratory dinner for guests, partners, and health staff completed the day’s activities.

Watch a video about Ms. Tirhas’ responsibilities as a health extension worker.