“It was always my dream to have a contribution through my profession to minimize wastage and avoid stock outs of pharmaceuticals. The IPLS for HEWs TOT I received is comprehensive in that you are trained, you practice, and are able to train others and eventually you can see fascinating results.” July 2012

Alemu G/giorgis is a 23 year old young pharmacy technician working as a store manager in Rahiya Health Center. Alemu received the training of trainers (TOT) on Integrated pharmaceutical Logistics system (IPLS) for HEWs in  May 2012 organized by JSI/SC4CCM in collaboration with pharmaceuticals  fund and supply Agency ( PFSA) and Tigray Regional Health bureau. Rahiya health center is one of the health centers found in Tigray, Central zone, 21 km away from Adwa. 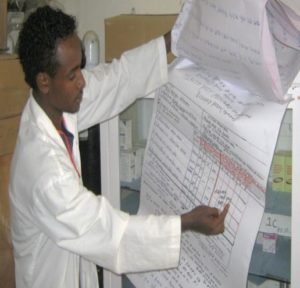 Alemu attributes his skill and knowledge on providing training and using adult learning principles the TOT. He was inspired by the support obtained from the Primary Health Care Unit (PHCU) Director, who provided continuous supportive supervision. Alemu recalled that previously, health extension workers (HEWs) used to request medicines at any time and sometimes were stocked out. Moreover, there was no means of tracking HEW consumption at the health posts (HPs), however, after providing IPLS ready lessons training to all HEWs, there have been positive changes.  Alemu has made remarkable progress in his understanding of basic supply chain skills in his store.  For example, he has played a major role in developing a draft drug list to his health center, started strengthened report-based resupply to all dispensing units including HPs, and created his own chart which he posted in store to track expiry dates of pharmaceuticals issued to each HP.

Alemu has made the slogan “No report, No product” become practical. He has made well organized documentations for HPMRR reports from each HP, documenting two months of HPMRR reports. His devotion in continuous follow-up has resulted in the use of the Bin card, HPMRR and receiving models by HPs without any problem. He says, “It should begin from oneself so as to make teaching others easy, and I have tried my best to make my storage room a model to HEWs so that they can learn practically.”

He explained that despite his other busy schedules and activities, he managed to provide supportive supervision to HEWs once cascaded training. Collaboration of both the HEWs supervisor and PHCU team in giving due attention to supply chain related issues has contributed to his success along with the TOT and training materials kit he received from JSI/SC4CCM.

Alemu is encouraged by the system of managing HP supplies through capacity building and supportive supervision, and he is very eager to invite to one of the HPs under that catchment named Endabagerima for a visit. Finally, Alemu extended his gratitude to all individuals and partners who have contributed to build his capacity and knowledge, and put his continuous dream as he want to improve himself professionally and do his best to make a change.